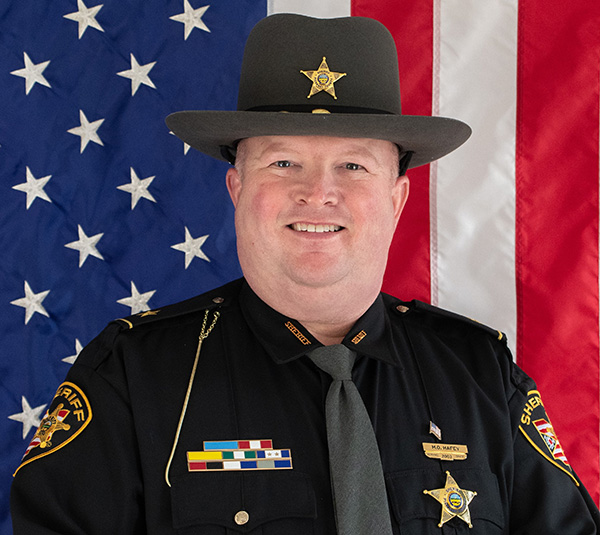 Sheriff Matthew O. Hafey has had a long history of community involvement. He began volunteering as a Cub Scout in Pack 744 of Ashville. He rose through the ranks and moved to Boy Scout Troop 159 of Ashville and Explorer Post 130 of Circleville. In 1990 he achieved the rank of Eagle Scout.

In 1992 Matthew graduated from Teays Valley High School. In 1993 he enlisted in the United States Navy. After boot camp at Great Lakes, Illinois he was stationed at the Navy Presidential Honor Guard in Washington DC. He participated in various ceremonies in and around the Washington DC area at such places as the White House, the Pentagon, and Arlington National Cemetery, just to name a few. While in DC, Matthew was selected to work at the Pentagon for the Under Secretary for Public Affairs giving tours. He escorted thousands of visitors through the halls of the Pentagon, providing a history lesson of the US Armed Forces.

After Washington, Mathew was assigned to the USS Peterson (DD-969), a Spruance class destroyer. While on board he participated in counter narcotics operations with the US Coast Guard in South America. The ship also was attached to the Standing Naval Forces Atlantic. This is a NATO group which sails around the seas, ready at a moment's notice to be deployed anywhere needed.

After being honorably discharged from the Navy Matthew worked in logistics before getting into law enforcement. In 2003 Matthew joined the Circleville Police Department as a Communications/Jail Officer. While working as a Communication/Jail Officer, he attended Ohio University - Chillicothe's Southern Ohio Police Training Institute (SOPTI). He completed the academy in the fall of 2004 and was sworn in as a reserve officer. In May of 2005 he was hired as a full time officer at the Circleville Police Department. Matthew went on to complete his Associate's Degree in Law Enforcement Technology and graduated from Ohio University in 2006. Matthew continued his honorable service to the community at the Circleville Police Department for over 16 years. He attained the rank of Sergeant in March of 2015.

Matthew has received many awards and commendations over his career. These include, but not limited to:

Sheriff Hafey currently serves on the board of Haven House of Pickaway County, PAAC (Pickaway Addition Action Coalition), Pickaway County Commission on Aging, and Foundations4Youth, of which he is a founding member. He is also a member of Trinity Lutheran Church in Circleville.

In each of the 88 counties in Ohio, the Sheriff is the chief law enforcement officer.  The Sheriff has full police jurisdiction in all the municipalities, villages and townships within Pickaway County.

As outlined in Section 311.07 of the Ohio Revised Code, the Sheriff must provide the following services: Law enforcement, court security, service of papers, jail operations, extradition process and transportation services.

It is the mission of the Pickaway County Sheriff’s Office to provide professional, high quality and effective law enforcement, correctional, and court security services in partnership with the community.  We strive to serve all people within our jurisdiction with respect, fairness, and compassion.

The Pickaway County Sheriff’s Office is committed to improving and enhancing the quality of life and ensuring that Pickaway County is a safe place to live, work, and visit by nurturing public trust, fostering community partnership in crime prevention, and by holding ourselves to the highest standards of performance and ethics.